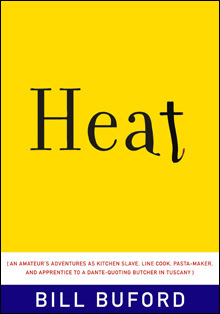 Such fun. Buford, long the fiction editor at the New Yorker, had always cooked for friends and thought he was pretty good at it. After striking up a friendship with Chef Mario Batali, he decided to see if he could hold his own working in the kitchen at Batali’s restaurant, Babbo. Thus began his tenure as “kitchen bitch”, then line cook and the chronicle of what it’s like to work in an esteemed kitchen, high on pressure, long on ego and professional jealousies and short on tempers and patience. From there, Buford mimics Batali’s path to super-chefdom by going to to learn to cook food where the food is from. He apprentices with a pasta chef in a tiny Italian hamlet and with an eccentric butcher in . Here especially, he has a wonderful way with words and brings the character of these real characters to life. A remarkably insightful and entertaining story that follows both Batali’s rise from pizza cook to superstar and Buford’s own transformation from an accomplished home cook to a seasoned, high-profile restaurant-trained cook. Buford also goes into great detail and history about how dishes came to be that borders on the obsessive while remaining readable to those of us who have trouble boiling water.
Posted by Reed Next at 2:03 PM 0 comments

I'll Sleep When I'm Dead: The Dirty Life and Times of Warren Zevon by Crystal Zevon 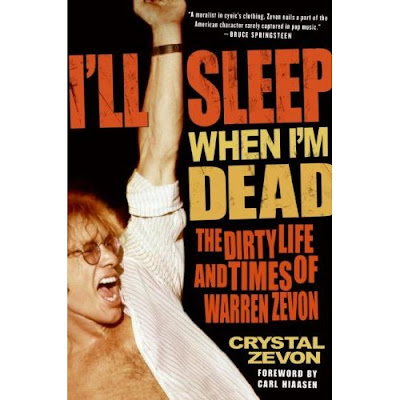 Written by his former wife, , at his own behest, I’ll Sleep When I’m Dead is comprised of interviews with more than 80 of the singers friends, fellow rockers, endless girlfriends, and family. It is a warts-and-all biography, heavy on the warts, many of them genital. Zevon was an unquestionably gifted singer, songwriter and musician, was classically trained (a rarity among rock musicians) and was the distinct oddball coming out of the lame-ass 70's SoCal school of bedwetters like the Eagles, Jackson Browne, et. al. . However, he was plagued with an addictive personality that first showed up in his legendary alcoholism. Once he “beat” drinking, he became a sex addict and a shopaholic. From the very beginning of his career, Zevon was enormously self-absorbed, cutting people in and out of his life for perceived slights, all the while acting like a petulant child. Talk about a guy who believed his own press clippings--once the Internet hit, he would go to chat rooms about his shows and defend his performance, under an assumed identity, of course, being a giant chicken-shit who couldn’t deal with confrontation. The book certainly fills in the blanks and informs the reader on the man though I could've done without the tremendous detail. But apparently, that's what Warren wanted and, narcissist that he was, I'm hardly surprised.

I’ve learned to appreciate a person whose work I admire for their work and not for some bullshit perception that since I like the music (or writing or acting or whatever), the person must be swell and cool and share my views. Not so Zevon and this book leaves me with a really bad taste in my mouth and the desire to take a long, hot shower. 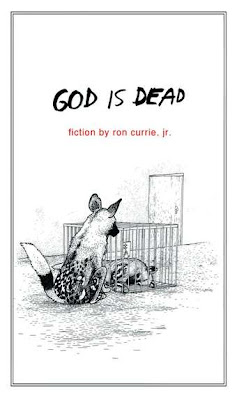 A very dark but promising debut though bleak stuff, this. Currie imagines a world where God takes human form, that of a Dinka woman in wartorn Darfur. When her mortal body dies, God is trapped and dies, as well. As the world learns what has happened, it sets off a series of events that Currie relates by connecting the stories together. Some very thought provoking pieces here, including an interview with the wild dogs that ate God's body and the changes they go through (speaking ancient Hebrew and Greek among them), and a group of teenage boys who, left to themselves, make a very deadly pact. Other pieces makes light of attitudes and values society has given weight and importance only to find they mean little in the end. Sometimes the literary devices used make it obvious Currie isn't long out of grad school and he's reaching a bit but this is a guy to watch.