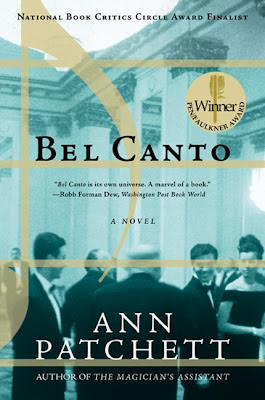 Ann Patchett is a bestselling, award-winning novelist.  As if that weren't enough, she recently became a bookseller.  After Nashville lost its best-loved indie bookstore, Patchett partnered with former BDD sales rep, Karen Hayes, and opened Parnassus Books to fill the void.  (Full disclosure: Karen is a friend of mine and was always one of the most respected and beloved sales reps in the biz.)  Much has been made of her decision to enter into the realm of bookstores at a time when publishing is more uncertain than ever, people read little and buy books even less, and Jeff Bezos continues to create a monolithic retail empire that rivals the ancient pharoahs in scope.  As a result, I feel something special for Ann Patchett and, having never read her work, I was thrilled to find two of her books at the re-sale shop where I often find treasure.  Bel Canto is treasure, indeed.

Here's the set-up: in an unnamed, underdeveloped South American country, a birthday party is being thrown to curry favor with the CEO of a Japanese electronics giant in hopes he will open a much-needed factory.  Mr. Hosokawa is a lover of opera and the administration has hired Roxanne Coss, the reigning queen of sopranos, to entertain him at the vice-presidents house along with a host of international business luminaries.  As the stunning performance comes to an end, the lights go out and from the airshafts emerge revolutionaries whose plan is to kidnap the country's president.  The rub is that the president cancelled at the last minute to stay home and watch his favorite soap opera and so, right off the bat, the situation has gone horribly wrong.

What unfolds is far more than a tense hostage drama.  It is an examination of how music binds people together, changes them, transforms them, uplifts them, and creates common ground where there is little.  In honesty, I have little appreciation of opera.  What I have heard simply doesn't speak to me but Patchett writes so beautifully about it, it may be necessary for me to rethink this.  However, it was more than just opera itself.  Patchett shows how music can completely remove the terrorist from his tiny backwater village, how the worldly CEO recalls the sense memories of attending his first opera as a child when his family could scarcely afford such a luxury and how even the leaders of the coup respect the soprano for her skill and how her voice could cause men to go into battle just to protect it.

Patchett peoples the story with characters of great diversity, richness and depth: the isolated Diva is made human, the aloof CEO is made flesh, and Hosokawa's translator, Gen, is the heart and soul of the book.  The interactions between the characters is far more than Stockholm syndrome as this unlikely collection of business types, dignitaries and dirt-poor soldiers unite behind the power of song.

After reading Bel Canto, my "special feeling" for Ann Patchett has grown considerably.  Please keep fighting the good bookstore fight, Ms. Patchett, and, by all means, keep writing.
Posted by Reed Next at 11:39 AM 2 comments

Of Dishonest Schemes and Dreams of Genies

A few weeks ago, there was an unsettling article in the New York Times about a man who created a company to furnish authors, many of them self-published and aspiring, at best, with favorable book reviews, mostly on Amazon and other websites where 5-star reviews are the coin of the realm and the key to successful sales.  The authors paid him, sometimes handsomely, for the privilege (you can read the entire piece here: http://goo.gl/YLCqh).  As an example, they wrote of an author who has become quite successful utilizing this service, but who also went so far as to give his own work high marks under several pseudonyms while giving low marks to other authors. 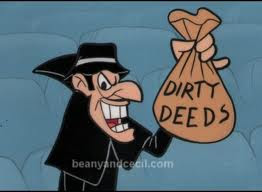 What we learn from this article is what we already suspected: this happens all the time, whether for pay, like this Rutherford fellow whose defunct company, gettingbookreviews.com is the meat of the article, or under false pretenses or both as in the case of the aforementioned author, John Locke, whose use of these tactics made him the first self-published author to sell over one million e-books on Amazon.  Locke takes it all in stride, a sign of the times, a legitimate way to distinguish himself among all those books that get published every year, no bad taste in his mouth.  Coming as no surprise, Locke's next work was a non-fiction primer, "How I Sold One Million E-books in Five Months".

Let me just say how utterly distasteful I find this whole practice, as a book blogger, as a former book publicist, and as a reader.

As a blogger, I am beholden to no one.  There have been times when I disliked a book enough that I simply didn't bother to post about it as it was a waste of my time and yours.  There have also been times when I have received advance copies from friends and industry colleagues whose books could have used a "push".  While there may have been a twinge of remorse on my part that I couldn't help out this friend or colleague, in six years I have remained honest in my assessments of the books I've read--if I liked it or not, I said so.

As a publicist, you know damn well how cluttered the reviewer's desk is, how little time they have, how little space is available for a book review (of all things!).  Part of your job as a competent flak is your ability to distinguish the book from the pack.  For all your efforts and all your cleverness, sometimes you win. More often you lose but from this you learn that base hits add up and most home run kings often lead the league in strikeouts.

As I've opined in the past, the conceit that "everyone has a story" is one of the inherent dangers of self-publishing because not every story deserves to be published.  The other problem is that once self-published authors actually hold a book, their book, in their own two hands, well I haven't met a one who doesn't think they don't belong in the Times Sunday supplement or on Oprah's settee even though the book is a field guide to the tastiest edible nocturnal plants of southwestern Ohio and how to paint them on rocks with acrylics and then use them to decorate your guest house.

Ultimately, where I take the most offense is as a reader.  I'm no naif, no Polyanna, no Pangloss.  I'll accept hype and buzz, if they're legit-ish (don't get me started on the practice of 'blurbing'), I'll understand if I didn't love the book, if it didn't speak to me, if you've written about events or characters I simply dislike or your style is too fill-in-a-blank-of-your-own here. Just tell me a great story.  Don't bullshit me.

Yesterday, I saw a small bright spot from our friends at Shelf Awareness: four dozen UK authors have condemned these practices and have pledged not to utilize these tactics (http://goo.gl/JOvEU).  I hope authors 'round the world will follow suit.

I suppose committed readers will find all this as tawdry as I do and I suppose I can't expect the casual reader to vet the books and authors they read, given they read so few these days.  However, it does seem that, as in so many other instances in our current society, the social compact is in tatters, honesty is entirely flexible, and success is the only true measure.   Once this door has opened, never to be shut, it seems the only genies that can be put back in their bottles were on 60s sitcoms.
Posted by Reed Next at 3:28 PM 0 comments