Mad World: An oral history of new wave artists and songs that defined the 1980s by Lori Majewski and Jonathan Bernstein 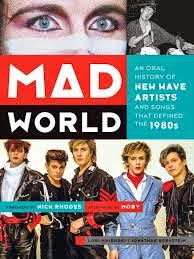 A delightful look at three dozen or so of the most prominent 80's new wave bands written in a format similar to Legs McNeil's classic punk rock paean, Please Kill Me. Each chapter begins with a band and a particular song the authors felt was definitive followed by each of the authors' recollections of the band and song. Bernstein is the curmudgeon; Majewski, the fan-girl. They are honest in their opinions, adulation, and disdain but explain why that song, of the many, many songs in a band's catalog, was chosen for inclusion. Like the New Wave itself, the bands are mostly British with a smattering of American acts.

From there a member or members of each band recall how the song came to be, what it meant to them at the time, their thoughts on quick success and quicker failure, and a few cheap shots at other artists. Not surprisingly Ian McCullough gives Bono a drubbing, heavy on the vitriol, and Spandau Ballet's Gary Kemp remains convinced his was the greatest band ever. Silly person.

Finally there is a That Was Then, But This Is Now section (love the ABC nod) that catches us up with the musicians, most of whom seem to be still flogging it on the reunion circuit or who have made some peace with their musical pasts. It also gives them a chance to get in one more knock at former bandmates (Thompson Twin Tom Bailey says frankly "...when Alannah's out of money, she'll be on the phone wanting to do it [a reunion]".)

Oddly, the most insight is proffered in the foreword by Duran Duran keyboardist Nick Rhodes and the afterword by Moby, much to my chagrin. (I've always held that Moby is a bloviating pretender. Others disagree. I don't care.) I thought Rhodes was especially thoughtful and generous in his appraisal of the era and his place in it. Moby was perceptive in describing New Wave music as gentle but sexless.

Mad World is a jaunty romp, heavy on eyeliner and the authors are still inspired by the music though informed by the distance thirty years provides. As we all know, some of this music holds up and much of it is like a fossil--once alive & kicking (sorry) but now preserved in whatever substance shoulder pads are made from. There is talk of a Mad World 2 and should it come to pass, I will gladly fork over my hard-earned simoleons for another helping of New Wave lore.

Check out http://madworldbook.com/
Posted by Reed Next at 4:25 PM 0 comments

To Rise Again at a Decent Hour by Joshua Ferris 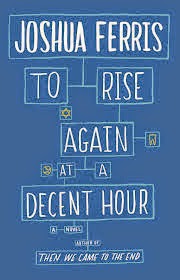 I was excited to receive this well before publication (it pubs today, May 6) but I have to say I'm confounded by the book. The premise: Dr. Paul O'Rourke has a successful Manhattan dental practice, is a devout Red Sox fan, as well as a devoted atheist. One day he finds he is being impersonated online though not in the way the reader expects: someone has built a viable website for his dental practice, something Paul has been unwilling to do despite the need to do so. Then he finds a Facebook page and a Twitter account in his name where he finds someone quoting Biblical scripture. Odd biblical scripture at that. His search leads him to question if the online Paul is a better man than the real one. It also leads to a strange religion, The Ulms, whose core belief is doubting G-d.

As we know, Ferris writes beautifully and the book is engrossing but I couldn't help but feel unfulfilled by it. As a character, Paul is annoying, his emotions are misplaced and I question his beliefs. He follows the Red Sox with intensity and ritual (he eats the same meal before the game, skips watching the 6th inning, etc.) but pines for the days when he could count on them to be losers. As much as he says he loves their recent championships, Paul prefers them the way they were.

Much the same can be said of his atheism. A lot of this Ferris works out in conversations between Paul and his head hygienist, Mrs. Convoy, a woman of deep belief, and some of these are very funny. There have also been two relationships Paul has had, one with a Catholic woman and one with a Jewish woman, in which he became consumed by their religious beliefs and their families. He became desperate to be part of those families which he thought he loved for their respective Catholic-ness and Jewishness but he is unable to see them for what they are. While both families are indeed observant and their religion binds them together, he mistakes their loving family ways for deep belief.

Then you have the whole thing with this secret religion, The Ulms. Turns out the guy who creates Paul's online persona is beseeching him to come to Israel where the Ulms have a community and where Paul can learn of his true lineage and be accepted. The reader would think this would be the perfect fit for a doubtful atheist but Paul can't quite buy in to this either.

Perhaps I've missed the point Ferris is trying to make. Is it that Paul can't have it both ways or that despite what Paul thinks he believes in, he doesn't really believe in much of anything? I can't say and that is why, even halfway through the novel, I felt, while it was highly readable, like Paul, it was working hard to get nowhere.
Posted by Reed Next at 6:00 AM 0 comments

Email ThisBlogThis!Share to TwitterShare to FacebookShare to Pinterest
Labels: Joshua Ferris, To Rise Again at a Decent Hour

How to Succeed in Business Without Really Crying: Lessons From a Life in Comedy by Carol Leifer 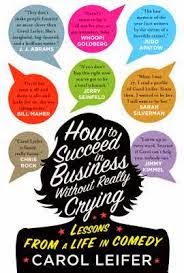 However, it appears that formula is no longer a way to move the comedian book any more. Instead of funny stories about breaking into the biz and some personal anecdotes meant to show how they're just reg'lar though funny folks, now the book needs to serve another function. Carol Leifer's book is a thinly veiled business self-help book. In it, she tells her story and passes on wisdom that is designed to help you “get ahead”. Oy.

Now I realize Leifer isn't the household name that Jerry Seinfeld is but she rode that same bus, performing alongside most of the aforementioned comics and is a successful stand up and comedy writer (including writing for Seinfeld and Modern Family). She was among the small group of successful women who stood in front of fake brick walls with a mic and a stool and did her bit and I was the dorky kid who devoured all those specials and syndicated shows on TV and watched all those comics stand in front of fake brick walls and do their bits.

Certainly, the stories are there but they feel watered down. Reimagining the stories as a way up the ladder, “whatever your business”, left me flat. The chief cruelty is the use of parenthetical statements in which “joke goes here” as though with a wink.

Carol, I've always enjoyed your work but this book just doesn't do right by you. I wish it had.
Posted by Reed Next at 9:53 AM 0 comments