Furious Cool: Richard Pryor and the World That Made Him by David Henry & Joe Henry 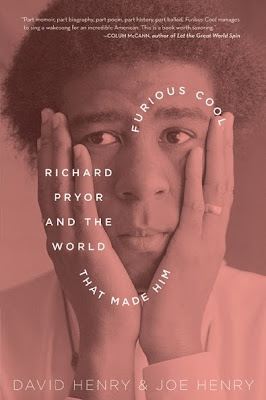 My first memory of Richard Pryor was when he guest-starred on a 1971 episode of the Partridge Family where the Partridges show up at a Detroit soul club run by Pryor and Louis Gossett, Jr., who played his brother. The club was expecting the Temptations but, insert kooky sitcom mix-up here, they got the Partridge Family instead. The brothers need this show to be a smash to save the club from loan sharks and now are faced with certain doom. The plucky Partridges plod on, even writing a soul-tinged song for the show and, as can only happen on TV, they play, save the day AND the club, and the viewer gets a glimpse of what racial harmony might look like.

I thought it was the coolest episode I'd ever seen.

Gossett was so handsome and Pryor was so cool and at the end of the show, Danny was given honorary membership in the local black militant society, complete with beret! Oh, how I wished that was me! Thing was, I didn't know anybody black and it wasn't until I was 7 and away at a weeklong summer camp that I had any interaction at all. My junior counselor was black but I learned quickly it didn't matter one way or the other. He was cool and kind and he helped me through my rather desperate bouts of homesickness. I hope I never forget him.

Though racism was everywhere when I look back on my youth, I didn't grow up in a racist household. At one point, my Father had worked among black men and once told me that if I ever used the word 'nigger', he'd "knock me into next week". That was pretty strong stuff from a very non-violent man. Still, despite the fact that blacks used the word 'black' to describe themselves in the early 70s, he still used 'colored'. He meant no disrespect. It was the phrase of his day.

I think my Mother was afraid. She didn't know any black folks, save the couple who lived in the very best neighborhood in town. He was a dentist and his wife was the principal of an elementary school and I think knowing them made my Mom feel like she was 'down' despite the fact that most African Americans in my town didn't live anywhere close to our part of town. Their son was a sweet guy. He was a few years ahead of me and the only black kid in our school system. Talk about having it tough.

So I didn't know Richard Pryor for what he really did and it would be years before I'd listen to him and start to 'get it'. The two concert movies, released while I was in my teens, were where I got on the bus. All that dirty language appealed to the teenage boy in me but I also remember thinking that I'd never seen any stand-up use their body that way. It was during this time that he also became a punch line after the 1980 freebasing incident in which he set himself on fire after dousing himself with 150-proof rum.

Still, it would be years before I understood what Pryor meant to people, especially to his own and how big his influence was. Sadly, in 1986, he was diagnosed with multiple sclerosis and because he was no longer dangerous, it came time to appreciate him.

In Furious Cool, The Henry brothers, screenwriter David and musician and producer Joe, describe how much Pryor's comedy meant to them growing up white in suburban Akron, Ohio and how their love for his work grew into this book (and perhaps an upcoming documentary or bio-pic). However, this is no puff piece on Pryor. I found it to be an honest and often painful look at a very funny, very troubled man who just couldn't find himself.

If you know about Pryor, you know he was brought up in a Peoria whorehouse run by his grandmother while his father pimped and his mother turned tricks in the living room. He started emceeing shows and doing a bit of stand-up at home, then on the Chitlin Circuit, and eventually moving to the burgeoning Greenwich village club scene in New York. While Pryor was funny and insightful on stage, for some time he was unable to find his own voice, instead mimicking Bill Cosby's style. When he did find his voice, he became the great comedian and truth teller we know.

Fame, really BIG fame, came and proved to be his undoing. Drugs and bad decisions plagued him for most of his adult life. As the Henrys describe it, there was rarely a time over the course of many years when Pryor wasn't coked to the tits. Like an addict does, he lied to everyone about everything, all the time, repeatedly explaining to family, friends, the industry, and the press how he was now off drugs, fully focused and committed to his work. Uh huh. Then explain Jo Jo Dancer or Brewster's Millions to me, Richard.

Richard Pryor was so many things to so many people. To fans of comedy, he was a trailblazing genius. To black Americans, he was simultaneously a source of great pride and considerable shame. To many white Americans, my Mother among them, he was a foul-mouthed and scary 1970’s black man. To Richard Pryor, he was everything and nothing. The Henrys do him justice while pulling no punches.