What It Is Like To Go To War by Karl Marlantes 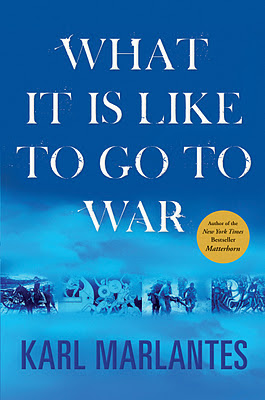 I have never had to serve my country nor was it something I ever considered.  When I was of age, the Cold War was winding down and the pain of Vietnam was still divisive and hurtful.  Unlike veterans of previous generations, these men were disparaged and misunderstood and left to the fringes by a society that was embarrassed and lacked the appropriate compassion and understanding to help them heal.


Fast forward to the current era when we have recently fought two wars on two fronts.  Suddenly, young men were going off to war again with some returning home whole, others maimed, still others not at all.  It is a rare person who hasn't been touched by this recent round of national service.  Perhaps it is my age that allows me to consider matters differently but these young soldiers were fighting a very different war than my father did in the 1940's.

In his book, Marlantes examines the warrior as both an ideal and an all-too-real figure.  Through his own experience and insight, he explains who the warrior is, how the warrior must prepare and how he or she must be brought back into the fold of non-military life after their service.  This book has great power and important lessons.  It should be required reading for soldiers, their superiors, politicians, and the American people.

In the parlance of rap duo Eric B. & Rakim, Karl Marlantes "ain't no joke".  He went to Yale, was a Rhodes scholar and a highly decorated combat veteran of Vietnam.  Those decorations include the Navy Cross and the Bronze Star among others.  His first novel, Matterhorn, was championed by both the critics and the bookstores when it was published in 2010.  His non-fiction follow-up is remarkable.

It has been at least six weeks since I finished the book but hardly a day has gone by that I have not found myself still ruminating on it.  Marlantes is so unflinching in his honesty, so straightforward about his own mistakes, including his participation in what he describes as a "massacre", it has left me haunted.  After reading What It Is Like To Go To War, I have gained an even greater respect for those who choose to serve primarily because Marlantes makes me understand not only how awful it can be but also how glorious it is for a soldier who can finally put into practice all they have been trained for.

At the beginning of the first Gulf War, when Tom Brokaw announced on the nightly news that AWACS were in the air, my friend, who had spent years in the naval reserve, wanted to re-enlist because he had been trained to be a warrior but never got to use what he learned.  It boggled my mind.  "You want to go to war?  Why in hell?"  After reading What It Is Like To Go To War, I think I can begin to understand.

Email ThisBlogThis!Share to TwitterShare to FacebookShare to Pinterest
Labels: Eric B., Karl Marlantes, Matterhorn, Rakim, Tom Brokaw, What It Is Like To Go To War

3 Books, A Tune and Michael Kun

Happy 2012.  I'm deep in the throes of several books but to start the year off, I'm alternating my attention on three music books: Horace Panter's Ska'd For Life (which I posted about right before Xmas), I Want My MTV: the uncensored story of the music video revolution and Everything Is An Afterthought: The Life and Writings of Paul Nelson.

Panter's Ska'd For Life is a look back on his time with The Specials and I'm at the part that is familiar to all the viewers of VH1's Behind the Music--the constant touring is starting to create rifts within the band.  Obviously, I know how the story ends but I've learned a ton about a band whose work I've always admired and look forward to reading Panter's take on it

I Want My MTV is an oral history from everyone involved in the creation of MTV and the whole video explosion--execs, musicians, directors, VJs, the whole bit; lots of behind-the-scenes stuff, sex and drugs and rock 'n' roll (of course).  Not only am I going to YouTube to watch videos I'd forgotten about but authors Craig Marks and Rob Tannenbaum make clear the huge cultural effect music videos had not only on TV but commercials, movies and the music industry.  What I didn't know was how MTV and videos as an art form gave a lot of women music biz opportunities they never had before.

As for Paul Nelson, I never knew I knew his work until Everything Is An Afterthought arrived as a gift from my dear friend Rocky.  Thirty years ago, I read a piece in Rolling Stone about Warren Zevon that I thought was among the finest pieces of journalism I'd ever read (and I still do).  Turns out it was written by Paul Nelson.  Another one on Neil Young has stayed with me all these years.  Yup.  Penned by Paul Nelson. I'm absolutely fascinated by The New York Dolls.  Who signed them to Mercury?  Paul Nelson.  Naturally, I'm eager to read on.

Another book I'm about to begin (because I need to be reading even more books simultaneously!) is Everybody Says Hello by the delightful and insightful Michael Kun.  It is a follow-up to The Locklear Letters, a hilarious epistolary novel starring Sid Straw who is as schleppy as he is endearing.  I can't wait to see where we find Sid these many years later.  The book doesn't pub until April so it will be a while until I post my thoughts but please put this on your Spring reading list.  Better still, get a copy of The Locklear Letters now so you're up to speed.