I really appreciate the feedback about the look of the blog.  It has been very positive and quite helpful.  I've made a few more tweaks per your suggestions and think I might be done tinkering for now. 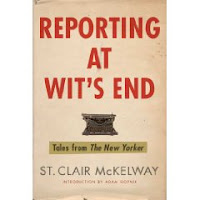 Also, I'd like to thank the nice folks at Bloomsbury USA for the copy of Reporting at Wit's End, a collection of pieces by St. Clair McKelway.  I've just started it and am taken back to an old New York and an old New Yorker.  The intro is by Adam Gopnik so the right tone is set right away.  At just over 600 pages, it'll take a while but I look forward to posting my thoughts about it.  The book just came out.

Another big thanks to my friend at Houghton Mifflin Harcourt for a recent care package.  I've finished Save the Deli by David Sax (just completed a draft of my forthcoming post) and am fifty pages deep in Howard Norman's upcoming novel, What Is Left the Daughter.  I've never read him but have always heard good things and am happy to report I'm most intrigued so far.
Posted by Reed Next at 3:00 PM 0 comments

After messing with it for a month or so, I've changed the layout again.  I found the last template hard to read and believe this is easier.  I'd ask for input but with no one actually reading this, I'm all about satisfying my own whims and fancies.
Also added a box on the right about what I'm reading now in hopes that it spurs me on to follow through more with my own posts.
Just in case you missed it, there is also a new post below about the former Mr. Zimmerman and his memoir, volume one.
Posted by Reed Next at 11:08 AM 0 comments 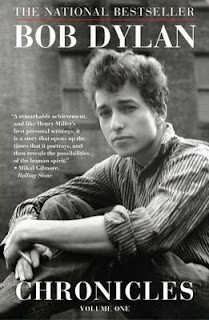 The first volume of Bob Dylan's recollections is an interesting read.  He names a lot of names, some well-known in relation to his career, others, less so; still more, forgotten. I had hoped it would be more linear but it skips around from early Dylan as reluctant Messiah to late/current Dylan as elder statesman then back a bit.
He paints a picture of America, and New York City, especially, that is of a different era; a world that was bigger and smaller at the same time.  A slower world that relied on paying your dues in coffeehouses and, unlike today's American Idol-imposed instant fame, a leg up from record industry men.
That said, his way of describing things, a way that might be described as Dylanesque were it someone else's memoir, gets caught in a certain rhythm and that certain rhythm got caught in my ear.  If you've heard his radio show on Sirius/XM, it's actually kind of fun in short bursts but, over the course of several hundred pages, I found it tiring. Still, I kept reading because it's Bob Freakin' Dylan.  The man, his music, and his mystique all made history and knowing your history is easily overlooked these days.
Posted by Reed Next at 10:55 AM 0 comments 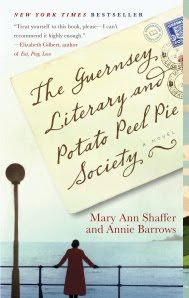 A woman I barely know gave me a copy of this when I helped her put a case of wine in her trunk (No. That is not a filthy euphemism. I really did load wine in the trunk of her car). When I saw the book and asked if she'd read it, she neither raved nor railed about it but simply told me to take it and enjoy.

I cannot recall the last time I was so utterly charmed by a novel (maybe Water for Elephants?) and I am so glad I read this little gem.

An epistolary novel that reminded me a little of Ella Minnow Pea by Mark Dunn, Guernsey is peopled with an array of characters I grew to like, then love, in the short span of the book and evoked a time and place in history that made me want to learn more.

Like most good Americans, I know next to nothing about the Channel Islands: I'd heard of Guernsey because of their cows and Jersey because of the attractive sportswear. Otherwise, bupkis. Shaffer and Barrows make the place seem idyllic despite the post-World War II time frame and the attendant hardships. An eye-opener, historically speaking: Britain simply stopped defending the archipelago, allowing the Nazis to hold it for five years. Nazis being Nazis, it was a nasty business.

The book reads quickly, the story is a pleasure to wrap oneself in, and it is a long afternoon well-spent. And thank you, Sondra.

The Dead Republic by Roddy Doyle 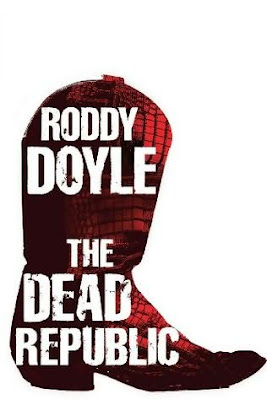 Due out in May, The Dead Republic is the final installment of the Henry Smart trilogy that began ten years ago. Unfortunately, it is an uneven blend of the first two books, with only a few examples of the fine storytelling from A Star Called Henry and entirely too much of the intellectual laziness that marred Oh, Play That Thing.

Readers of this blog know my love of the authors' work so it pains me to say I found this third episode a gigantic disappointment. So obligated to the author and the work to see this through, even my self-imposed 50-page rule went ignored.

Irish rebel Henry Smart has become a flat, uninteresting character of two dimensions, capable of only two emotions--love and anger. The number of times Smart meets someone and declares "I could have killed him. In the old days, I would have" would make for a spirited drinking game; one which would render the players shit-faced. As well, it appears that by book three, Henry has become to stupid that he can't even recognize his own long-lost wife, the dangerous and delightful Miss O'Shea, despite sleeping next to her for many years. She is equally clueless but gets to spend most of the book in a literal coma. Would that we were all so lucky.

How and why Doyle expects us to believe what he puts forth is unimaginable. The situations are preposterous, the timeline is grueling and Henry just won't die. It can only be hoped Doyle got this character and this looooong saga out of his system and is back to more worthy novels.