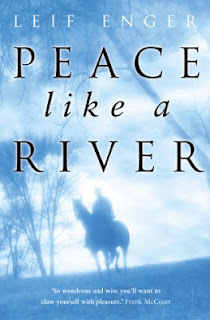 Today is a very special day in the world of books and reading.  It is the inaugural World Book Night here in the U.S. and I am so very proud to be a part of it.

The idea is to get books into the hands of people who don’t read much but would like to read more. Thirty different, acclaimed books were carefully chosen and tens of thousands of people across the country are giving these books away today, myself included. I was lucky enough to give away a favorite of mine, Peace Like a River by Leif Enger.  I read the book prior to starting this blog so there's no review handy but I will say it's an absolutely marvelous story, beautifully written, about faith, family, and personal conviction.  Leif Enger's prose is gorgeous and breathtaking and if you trust me at all, do yourself a giant favor and pick up a copy of this book.

World Book Night began last year in the UK and this is the first year the U.S. has been involved. Other countries will follow suit and the aim is to give away one million books in a single day across the world.
Publishers, printers, and wholesalers made these special paperback editions available for free and authors and agents waived their royalties.  Indie bookstores, chains, wholesalers, and libraries nationwide are on-board as are organizations like the American Booksellers Association and the American Library Association. Even UPS helped out by shipping these thousands of books for free.

As a World Book Night giver, I received twenty copies and gave them away today at work and in my neighborhood.  As I handed them out, I congratulated the recipients for being part of something much bigger and hoped they will love Peace Like A River as much as I do.  Now it's out of my hands and in theirs.

If you'd like to learn more, please go to www.worldbooknight.org and mark your calendars for next April 23.

Many thanks to Leif Enger and to Carl Lennertz, el queso grande of WBN, for allowing me to play my tiny part.   Well done, Carlo.  You did it!
Posted by Reed Next at 3:22 PM 0 comments

Everybody Says Hello by Michael Kun 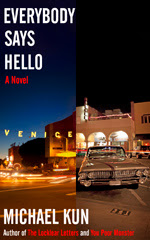 Occasionally, there are characters in books that I like so much or find so compelling, I wish the author would revisit them.  However, even for the authors who created the character from their own minds, hearts and experience, that is often too tall an order, the result unsatisfying or forced.  Updike was successful with Rabbit Angstrom as was Roddy Doyle with Paula Spencer.  I'm happy to say Michael Kun succeeds in catching us up with Sid Straw in his latest novel, Everybody Says Hello.

We were first introduced to him almost ten years ago in The Locklear Letters and now we are afforded the opportunity to see how he has fared since.  This time, we meet up with Sid as he's heading from his beloved Baltimore and a broken relationship to start over on the West Coast in a new position at a computer company.

Like its predecessor, Everybody Says Hello is an epistolary novel and Sid is a letter-writing dynamo.  (I especially loved the postcards he sends his young nephew that draw his sisters' ire.)  Unlike most epistolary novels, there is no correspondence; every letter is 'From the Desk of Sid Straw' and with every letter, nothing goes as planned. In his well-meaning zeal, each letter he writes makes a little mess turn into a bigger one and from there, well, the police are called, disputes arise with questionable hotel managers and his new life suddenly begins to unravel before it starts.

Despite the fact that his biggest problem is that he just can't get out of his own way, Sid is a likable, kindhearted guy.  He is a pleaser, a romantic, and something of a nebbish.  If Leo Durocher's maxim was correct, Sid Straw, the epitome of 'nice guys', not only finishes last but he's also been guilted into sweeping up the joint, doing the dishes and cleaning the ashtrays.   Among his writing talents, Kun makes you feel like you know Sid.  He's your nutty uncle or your old roommate and he drives you a little crazy but he means well and he's always been SO good to you and in a pinch, he'd do anything for you.  Other writers might have foregone that sense of humanity for laughs but Kun succeeds in telling all sides of Sid's exploits in a clean, concise way without sacrificing anything.  Best of all, Michael Kun is damned funny; in my mind, he's one of the funniest novelists writing today.


Though letter-writing has gone the way of the dodo,sadly, I would be curious to see how Sid is doing ten years from now.  Michael Kun, are you listening?

People of the Book by Geraldine Brooks 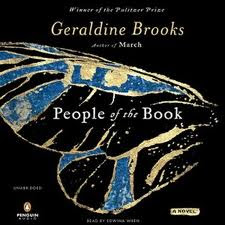 Before Passover passes me by, here's the perfect title to accompany all that matzah you might be eating.


People of the Book is a remarkable novel whose main character is a book, the celebrated Sarajevo Haggadah.  The haggadah is read during the Passover seder that commemorates the exodus of the enslaved Jews in Egypt.  Think Charlton Heston in the Ten Commandments. You know, "Let My People Go!", parting of the Red Sea, killing of the firstborn, Yul Brynner as Pharoah, the whole bit.  Throw in some songs, some wine and a reminder what a tremendous disappointment I was to my parents and it's like you're at the table with us.

A magnificently and uncharacteristically illustrated version, the Sarajevo Haggadah is believed to have been created in Spain in the 1400's.  At some point in the 16th century, it turned up in Italy and then at the very end of the 1800s, it was sold to the National Museum of Sarajevo.  During World War II and the long, ugly Bosnian wars, the Haggadah was hidden and kept safe, in one instance by the museum director, himself a Muslim.  You can read Brooks' fascinating New Yorker piece about the Haggadah and the museum director here: http://goo.gl/74ykP

In broad strokes, those are the facts.  What Brooks does then is piece together a dazzling work of fiction by imagining who wrote it, who commissioned it, who illustrated it, and who kept it safe in a longer narrative broken up by period pieces and some contemporary conspiracy.

Having never read her before, I can say Brooks is a gifted writer, given to clean prose, believable dialogue and a tremendous nose for research.  There are some contrivances along the way but they don't take away from this ambitious and satisfying book.

Happy Passover.
Posted by Reed Next at 2:39 PM 0 comments